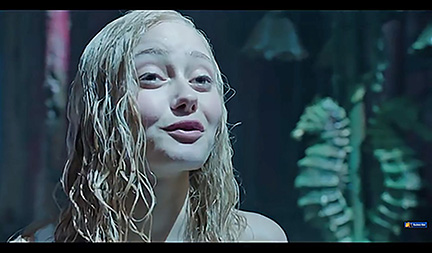 A scene from “Miss Peregrine’s Home for Peculiar Children.

The story is taken from a popular young adult novel by Ransom Riggs and is a contemporary mix of the “X-Men” and “Harry Potter” stories. All of this comes to life under the oddball vision of director Tim Burton, who has a solid track record of marrying his visual flair to oddball stories. It all sounds like a winning formula for cinematic success.

Alas, the end result isn’t quite a complete success, but there is still plenty of magic here to keep young audiences satisfied. Well, at least until “Fantastical Beasts and Where to Find Them” arrives later on in November.

“Miss Peregrine” centers on a teenager named Jake (Asa Butterfield) who sets off on a personal quest due to hints of a family secret revealed by his dying grandfather (Terence Stamp). His journey takes him to a small island in Wales, where, thanks to a magical time loop, Jake is able to step back into a 1940s-era boarding school.

The headmistress, Miss Peregrine (Ava Green) presides over a misfit bunch of peculiar children that would otherwise have been seen as freaks if they were exposed to the outside world. These children exhibit all sorts of magical abilities. They form a happy boarding school under Miss Peregrine’s loving protection.

The students certainly need her protection, as a shape-shifting creature is hunting for these peculiar children and will stop at nothing to get the chance to snack on their tasty eyeballs.

Obviously this story is not your typical, sanitized family fare. Burton has created a movie that has some genuinely scary moments that might traumatize sensitive children. But his film is also filled with generous amounts of magic and wonderfully inventive visual images.

These fantasy moments shine in the first half of the movie, but get shoved aside as the film turns to action as the story progresses. Unfortunately, the monsters action moments aren’t anywhere near as captivating as the film’s earlier, world-building set up. It doesn’t help things that many of the monsters come across as mediocre, computer generated creatures.

On the other hand, many of the other characters are quite intriguing. Eva Green is wonderful as the magical protectress, and Asa Butterfield proves to be a very engaging young protagonist.

In the end, “Miss Peregrine’s Home for Peculiar Children” is something of a mixed bag. It has moments of genuine wonder and a charming cast of peculiar characters, but the filmmakers can’t keep the momentum going throughout the course of the full story. There is certainly plenty of magic to keep most young audiences happy, but it’s not quite the cinematic bullseye many of us were hoping to see.

Movie reviews by Sean, “The Movie Guy,” are published bi-weekly in “The Port Arthur News” and seen weekly on KFDM and KBTV. Sean welcomes your comments via email at smcbride@sbgtv.com.com.

THE MOVIE GUY: A charming rebirth for ‘Bridget Jones’

It’s been 12 years since we last saw Bridget Jones in a movie, so it’s a bit surprising to see... read more